The Beauty and the Baller - Review 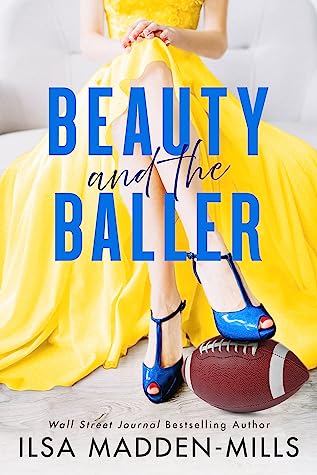 Gorgeous, talented, and brilliant, NFL quarterback Ronan Smith has the world in his hands. But after losing his career and his fiancée in a car accident, he falls into a pit of grief and bad choices. When a mysterious girl shows up to his party, he feels drawn to her and makes her his…for one night.

Former beauty queen Nova Morgan is on a mission. Scantily clad as a princess from a galaxy far, far away, she sneaks into a high-profile party to capture the attention of her favorite quarterback. But her hopes crash after an awful one-night stand.

Fast-forward two years. Broke and desperate, Nova returns home to Blue Belle, Texas, where, by a cosmic twist of fate, her broody neighbor is none other than Ronan, the shiny new football coach everyone adores. But he has no idea who she is.

The booster club keeps shoving women at Ronan to keep him in town. His solution? He proposes fake dating to Nova. But things heat up for real under these Friday-night lights when he realizes she’s the one who slipped away.

Has this jaded beauty found her forever baller, or will his past keep them apart?

Ronan had the world in his hands. Then a car accident happened and took everything away. He got his body back in shape but he can’t play football again and worst of all; he lost the love of his life. This has left him scared to open up to anyone, not wanting to lose them. But after some time, he tries to get his act together and takes a football coaching position in a small town.

Nova lost her childhood sweetheart when he chested on her. It threw her whole life off track - why? Because she was so young that she made him her life. But after years of being away from her ex, she slowly finds herself. But she vowed to never come back home. Then her mother passes away, and she had to move there to help her younger sister.

These two run into each other that first night and butt heads. Ronan doesn’t remember that he’s actually met Nova before... during a one-night stand. A one-night stand that left a very sour taste in Nova’s mouth. Which is why she dislikes him.

But they end up spending more time together when they decide to fake date. Ronan’s fighting women off with sticks and Nova just wants to make it easier to face her ex. But soon the fake dating feels like more...

I read this entire book in one sitting! I just couldn’t stop reading. The banter was great! They had such great chemistry, and it had moments that had me laughing my butt off! There were also sweet emotional moments that I really connected with.

There’s lots of death in this book, so if that is something that can trigger you, I wouldn’t read this. As someone who just lost someone, I could really feel where the characters were coming from and their motivations.

I really enjoyed the southern setting and small town. Made me feel like I was back home in TN. Even though this book is set in Texas.

Nova’s character is an absolute joy. She was selfless and cared for her sister deeply. Giving up her life to come back and take care of her. Her sister is also pretty freaking cool. She’s autistic and very smart. It’s not often I read about autistic characters because I don’t always think it’s done very well. (I live with two Autistic people) so while I’m no expert, I know a thing or two about the subject. But here I don’t mind it.

All in all, I really loved this novel and recommend it to everyone!

Have you read this one? If not, let me know what you're currently reading down below! As always, stay safe and happy reading!