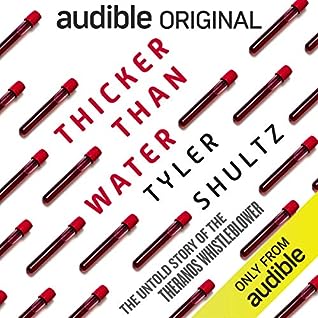 From the hero whistleblower of the infamous Theranos scam, Thicker than Water is a look at never-before-revealed details behind closed doors at the company, revealing a cautionary tale of corporate bullying, gaslighting, ego, and wealth run amok in Silicon Valley.

Tyler Shultz had been in the workforce for less than a year when he emailed Elizabeth Holmes, his employer and the CEO and founder of Theranos, with concerns that the company’s lab practices were faulty, ignored quality control, and were potentially dangerous to patients. The COO fired back with a dismissive and insulting email, to which Tyler replied: "Consider this my two weeks’ notice."

From there, his life spun out of control at the hand of Elizabeth, her team of high-powered lawyers, and the patriarch of Tyler’s own family, George Shultz—one of America’s most prominent statesmen, who sat among the top of the Theranos Board of Directors. And yet, Tyler forged on. To protect his own conscience, the honor and reputation of his grandfather, and the health of patients worldwide.

Thicker than Water is Tyler’s as-told-to story—a harrowing and heartbreaking roller coaster of biomedical drama, family intrigue, and redemption—that will ultimately make you feel as though you are at a dinner party, seated next to a brilliant friend with one hell of a story.

If you read my review for Bad Blood, then maybe this will not surprise you. I said the whole Theranos story just sucked me in. I’ve never been this interested in a true story before. Even my partner started asking me if I was watching more of that “healthcare lady who scammed the world”.

So I knew this Audible Original was a thing. It was even in my wishlist, but I didn’t want to shell out $20 for approximately 4 hours of content. So it sat there for a few months... until I got an email saying I’d get 3 free months of Audible Plus. Hell yeah!

The first thing I added to my library was Thicker Than Water. I set it to 2x speed and painted my nails.

This is Tyler Shultz’s story in his own words. I knew of his story along with all the big plot beats but hearing the smaller details and to hear the emotion in his voice and the awkward laughter. It really brought the story to life. He has this way of telling his story that made it sound like you are just sitting around a campfire and chatting with a friend.

I won’t go into many details of the story but he was one of the whistleblowers, one of employees who used to work there and couldn’t vibe with whom Theranos was lying to everyone and putting their health in danger but Tyler wasn’t just an employee. His grandfather sat on the board of Theranos and all this caused their family a lot of pain.

It’s an interesting story and if Bad Blood interested you, I’d suggest giving this a listen.