A Duel With The Vampire Lord - Book Review 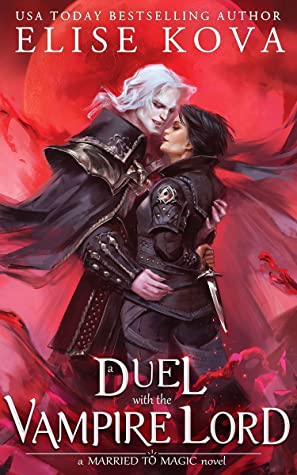 On the night of the blood moon, the Vampire Lord must die.
Floriane's position as the forge maiden of Hunter's Hamlet is one of reverence, for it is her skill that arms and protects the vampire hunters. She knows her place and is a faithful servant to the Master Hunter and her community... until the night of the blood moon. Until her brother is dying at the hands of the Vampire Lord Ruvan.
Wanting to defend her home at all costs, Floriane fights the vampire lord, ready to give her life if it means taking his. But Ruvan doesn't want to take her life... he wants her.
Kidnapped and brought to the vampire castle, Floriane is now blood sworn to the vampire lord. She is bound in mind and body to her worst enemy. But Ruvan isn't the fiend she thought he was. She learns the truth of the vampires: They are not mindless monsters, but a proud people, twisted and tortured by an ancient curse.
Ruvan believes that Floriane might be the key to ending his people's suffering. All Floriane wants is to defend her home. Loyalties are tested and the lines between truth and lie, hate and passion, are blurred.
When her dagger is at his chest, will she be able to take the heart of the man who has claimed hers?
A darkly-reimagined Snow White meets inspiration from Beauty and the Beast in an epic fantasy world of hunters, vampires, and curses that run deeper than blood. This stand alone is complete with a "happily ever after" ending. It's perfect for fantasy romance fans looking for just the right amount of steam and their next slow-burn and swoon worthy, enemies to lovers story.

I read this all in one day. It’s over 500 pages, but I just couldn’t stop. Sure, my eyes hated me after, but I didn’t care. I just had to keep going.
I really love this series. It’s not the most spicy, but it has a wee bit of steam. I enjoy the slow burn of this one. It’s also enemies to lovers which I adore.
We follow Floriane, who holds a very high but lonely position in her village. She’s taken by their greatest enemy, the night of the Blood Moon. Floriane’s trapped with a group of vampires. She hates vampires. They attack her village every full moon and killed her father.
The more time she spends with them, though, the more she sees that maybe... just maybe, not everything is as she was told. Now, she’ll have to work with the vampires to save both of their kind from the hell that traps them.
But in the process, she’ll have to guard her heart from the vampire lord.
The writing is great as always. Very detailed and really brings together the world. This is one of the best in the series. Each one just gets better and better.
I love the side characters. They feel so real and flushed out. It’s almost like a found family kind of vibe in this one. It reminds me of A Court of Mist and Fury in a lot of ways. Less spice, though. The sex scene in this one is almost YA feeling to me. It’s not fade to black, but it’s very... mild.
Honestly, the only thing that keeps this from being a full 5 star read to me is how towards the end, something separates our hero and heroine. When that happens, I don't like it. I’m here for the romance and when you take that away... I get a little sad. But it’s not for a super long period.
That being said, seriously, read this series! If you love fantasy romance, then you’ll love this! It’s also on Kindle Unlimited, so if you have that, you can get it at no extra cost. So go! Start this amazing series!